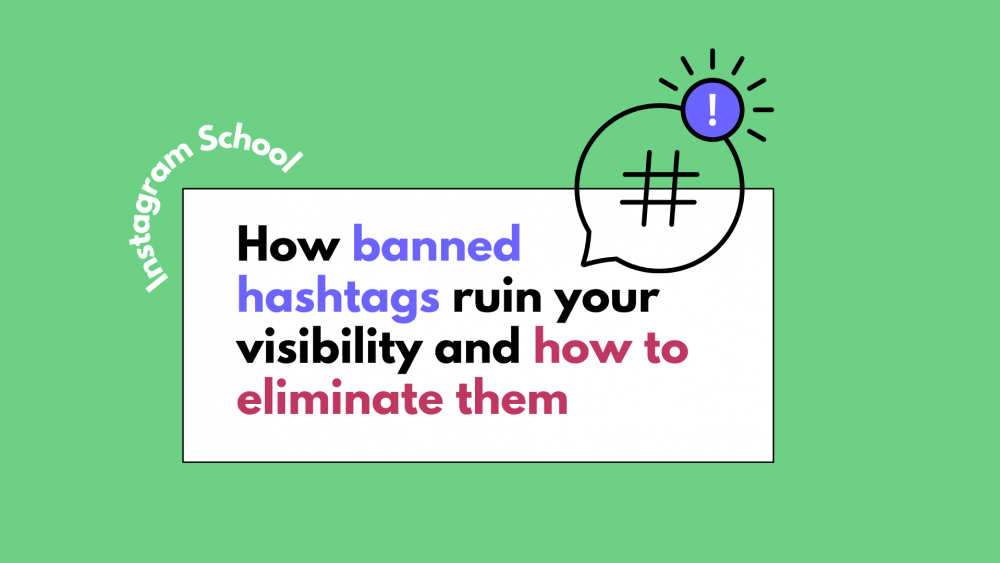 How banned hashtags ruin your visibility and how to eliminate them

Why do hashtags play such an essential role in the Instagram content marketing strategies of so many successful entrepreneurs? You probably already know the answer from our other posts: because they work. They’re one of the most effective ways to promote content organically, without spending a dime on it. They’re increasing your posts’ visibility – without them, your content would be visible only to those people who are your followers already, and you won’t attract the new ones so quickly. They just make your material viewable.

Furthermore, hashtags make it easier for your content to be found by people genuinely interested in your niche. Not the random strangers, the ones looking for something completely different. When you use the right targeted hashtags, the ones used by your target audience (we’ll discuss how to achieve such strategy in one of the upcoming posts!), your content attracts users who are authentically attentive and willing to engage with you. Easy to predict: this is the type of followers you want to have by your side because, on a long-term basis, you’ll transform them into loyal clients, adoring your products or services. Why do we talk about it with such certainty? Because when you reach the people who are looking for solutions from your domain, you’ll help them and gain their trust – that’s the basis of contentment and mutual win-win solution.

Are all hashtags beneficial for your growth?

Although you may not know it, not all the hashtags work in your favour.

Many are neutral: they won’t do any harm, but they won’t give you spectacular effects. On the other hand, instead of increasing your content’s visibility, there are also ones that can drastically decrease it. We call them banned hashtags.

Put simply, some hashtags are being banned because they seem suspicious, and the algorithm of Instagram reports that photos with those hashtags contain material violating the rules of the platform.

The Instagram policy is ultimately against bots, spammers, and people sharing inappropriate content – inciting to committing crimes, sexual harassment, child or animal abuse, self-harm, racism. They expend care to make sure that the platform is free of such symptoms.

Instagram restricts this wicked content from spreading by locking down any hashtag page with a lot of flagged content or by just banning specific hashtags altogether.

Putting hashtags out of action is a working way to eliminate spam.

There is a lot to learn about the practical function of banned hashtags and why it’s so crucial not to use them, so let’s dive deeper into the topic, shall we? 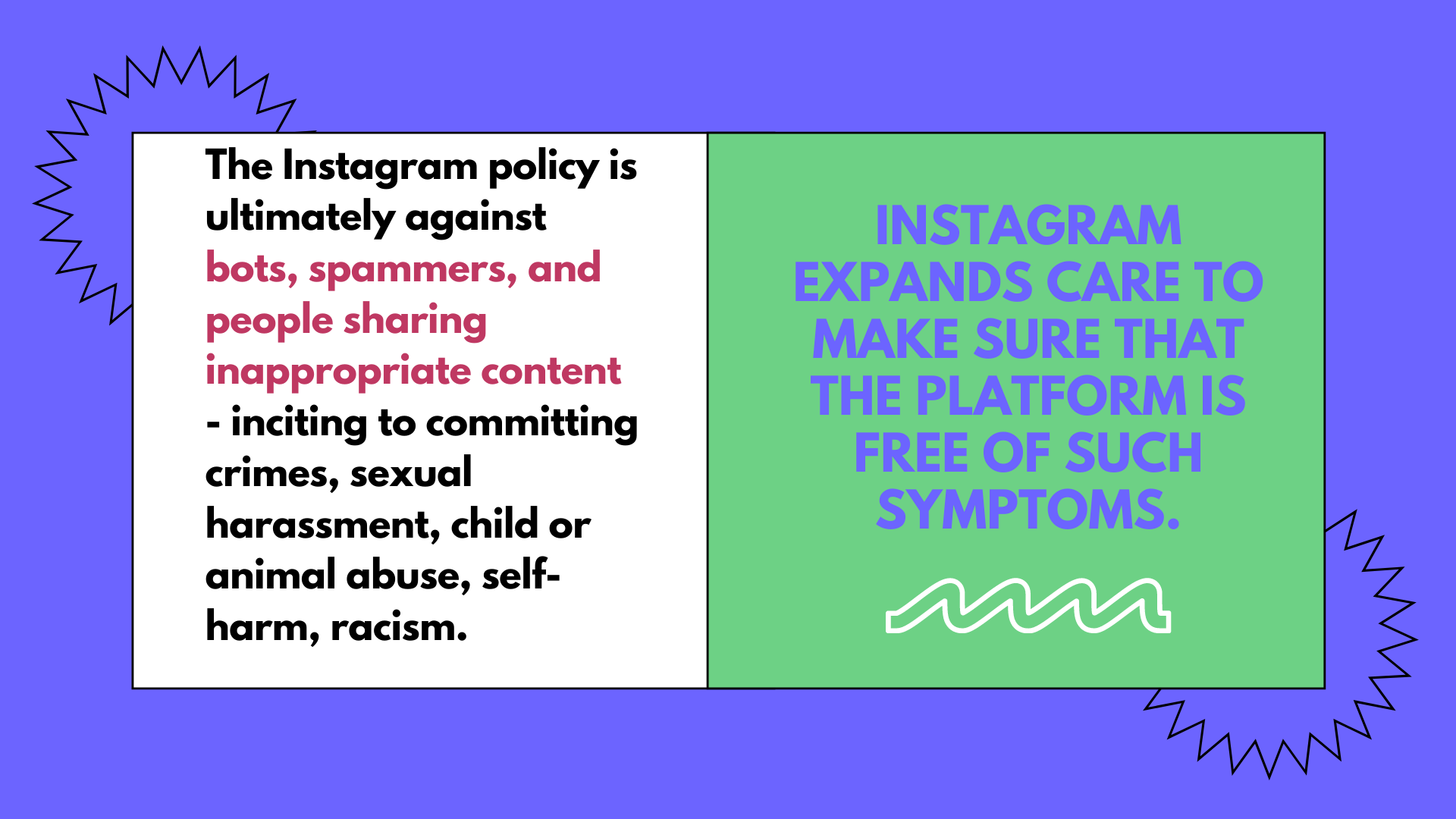 Hashtags are your tool to reach your target audience. When you use well-targeted hashtags, your content gets searchable, and your ideal follower/ideal client sees your posts. They provide a way to expose our content to a directed audience. They expand your brand reach. They work remarkably similar to SEO keywords – they’re providing you good optimization (when they’re consciously chosen, of course). There are so many ways you benefit from using attuned hashtags.

When you use one of the banned hashtags, you’re actually wasting the chance to get discovered by new people – potential followers or clients – because this hashtag isn’t working at all. It’s not going to give you a chance to be featured on the Explore Page, and if you use banned hashtags quite often, your account may be considered by an algorithm as a spam-sharing one.

Are you using banned hashtags? How to recognize them?

The existence of shadowban has never been officially confirmed by Instagram’s team, but numerous users admit they have experienced it. Usage of banned hashtags can drastically lower your posts’ reach and hinder your ability to reach new followers.

There are plenty of hashtags you would never ever expect may be banned. They’re not always nasty, offensive, or inappropriate at first sight. Many of them look entirely inconspicuous and innocent. So why have they been blocked and put out of action? Most probably, due to the increase of inappropriate content, Instagram decided it would be safer to prevent the spreading of inappropriate materials they may contain. 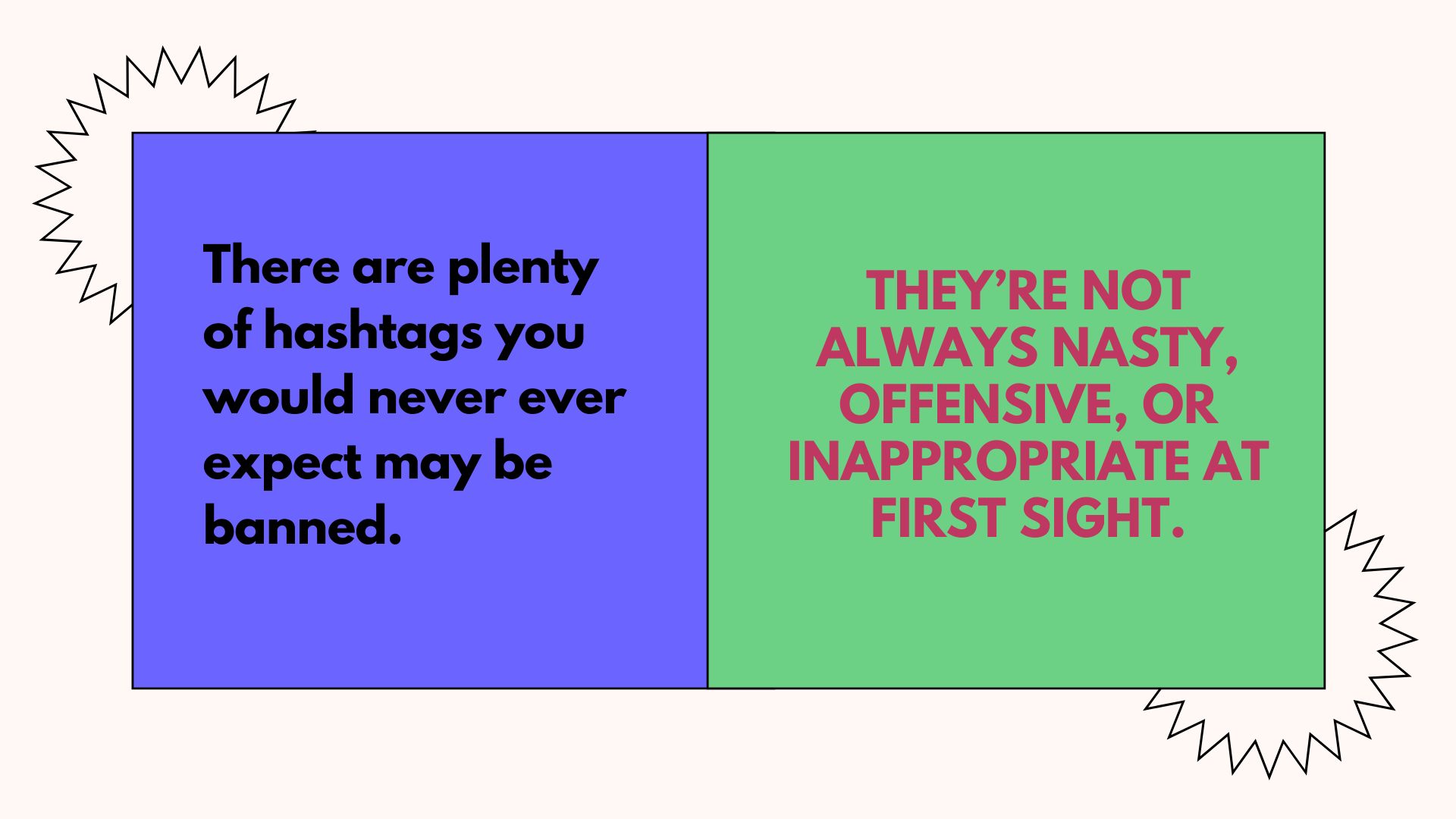 Instagram bans hashtags because of users reporting them as well. They want to minimize the risk of dissemination of spam and harmful or dangerous content (for example, dangerous for a particular age group). Some are banned permanently, and some only temporarily, and the list is updated daily – meaning it’s almost impossible to keep up with it.

You can do it manually, but there are two obstacles: it’s time-consuming, and you may choose the wrong, untrustworthy source and use the outdated list. That’s why it’s much better to choose a faster and more effective way: our IQ Hashtags’ feature.

READ ALSO:  Why is engagement rate a crucial metric, and how to check yours? 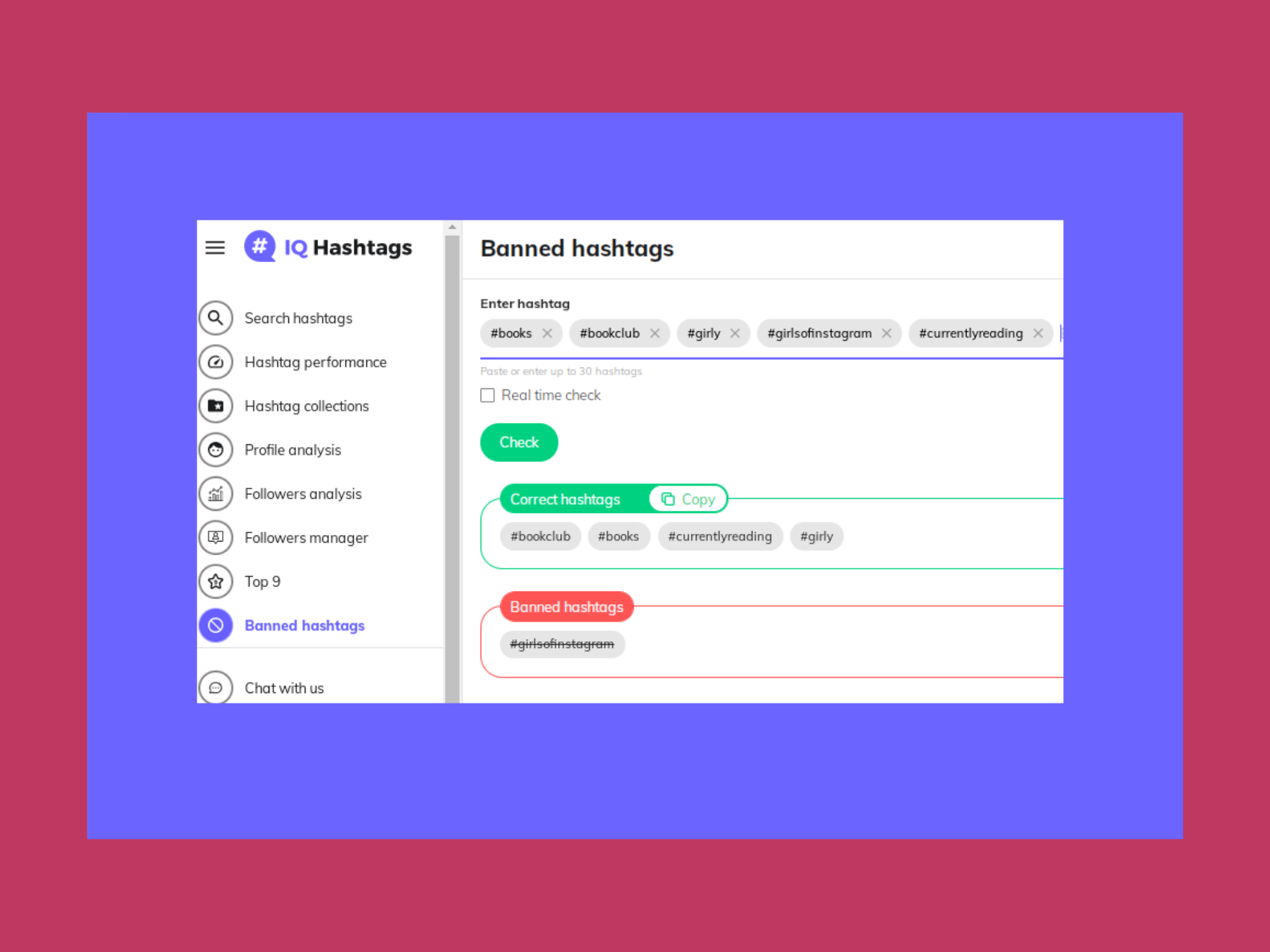 We have access to the most official and updated data, so our list of banned hashtags is always current and relevant. If you see that some of the hashtags of your choice are banned, you can throw them away and choose other ones instead – and scan your new choices right away. Our Banned Hashtags Feature is as easy and intuitive as it can be. All you have to do is enter the hashtags and separate them with spaces or commas, or paste the choice of hashtags you’ve already prepared (for example, from your phone notes or an Instagram editor). We can perform a real-time scan of your hashtags – which means we’ll load the information from the most current, official sources, and if a new hashtag was banned one minute ago, we’d already had it detected.

Banned hashtags can drastically decrease your post’s visibility, so if you’re trying to accelerate your online growth and level up your reach, it’s more than necessary to pay attention to them and avoid using them at all costs. Thanks to our tool, you can find out which hashtags are banned within seconds – use it, and you’ll never have to worry about banned hashtags again!